Fine Arts Students Spend Their Summer in Their Art

Episcopal Fine Arts students aren’t much for the lazy days of summer. They use the extra free time to pursue their passions all over the world.

Jason Zhang ’18 took a music production course at China’s Shandong University of Arts in preparation for his dream job. He started by learning basic music theory like chords, modes and tonality. Then, he was introduced to a music production app, Logic. He was able to record his own music in studio with the assistance of a voice teacher and sound engineer. Jason said, “This experience really opened my eyes and gave me a good start in music production.”

Anna Baumeister ’18 studied improvisation with The Groundlings in Los Angeles. This theatre is the old stomping ground of Melissa McCarthy and Will Ferrell. “I learned new ways to perform and practice comedy,” Anna remarked. “I loved hearing about the audition process in Hollywood.”

Jake Moorehead ’19 traveled to Stagedoor Manor, located in the Catskill Mountains, to study musical theatre voice and dance alongside his peers. He played the part of Scott in Disaster! and was able to speak with the creator of the show, Seth Rudetsy. “The experience was absolutely magical,” Moorehead reflects. “Not only did it aid me in developing my dancing skills, but it left me with some of the most joyful moments of my life, despite being extremely intense.” He adds, “It led me to the realization that musical theatre is something that I wish to pursue for the rest of my life, and connected me with an array of talented, benevolent friends.” 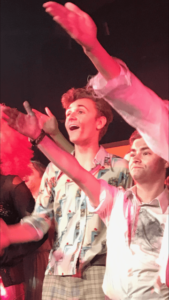 Libby Kellmanson ’19 attended University of Michigan’s MPulse Theatre and Drama Academy. She took classes in film acting, movement, voice, stage combat, script analysis, and scene study. Libby says, “I learned new methods and skills to bring onto the stage and into my life.”

Benjamin Ketchum ’19 got to see The Second City improvisation group in Chicago. He was also a counselor at Eagle Arts Camp in June.

Parker Joyce ’18 was selected for the Belmont Summer Vocal Arts Intensive, conducted by Jeffery L. Ames. He participated in a mass choir, master and music theory classes. Joyce sang a solo in the song, Rollin’ with the Pop Rock ensemble. He also got to hone his beatboxing skills.

“We learned many vocal techniques and I hope to apply them in my senior year to become a better singer,” says Joyce. Joyce plans to attend Belmont University in Nashville for a double major in music and business.

Margaux Halloran ’18 studied at Parsons School of Design for three weeks. “It was a truly unique experience,” Halloran explains. “I had the opportunity to go to college art classes and meet amazing people.” The program ended with an exhibition.

Alana Gregory ’19 went to Dance Makers National Competition in Myrtle Beach, where she took classes in all styles of dance, competed a solo, and auditioned for scholarships. Gregory describes the experience as exhausting. “But I was inspired and happy because I made so many new friends and received a scholarship for 10 free classes at the Movement Lifestyle dance studio in California.”

“These students are an inspiration to their classmates and teachers,” says Performing Arts Department Chair Taylor Horne. “We all stand to benefit from their dedication.”