Adjusting to the New Schedule

Adjusting to the Schedule 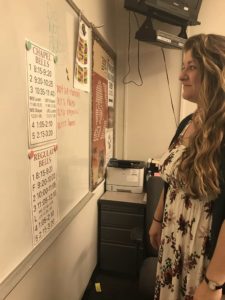 Many new changes were added to the school this year, among those was a completely different schedule. This approach to the daily routine was different than what had been used in years past, so it did initially cause some confusion. Most seem to be adjusting well to the change, finding that greatly enhances their time on campus.

Jillian Griffin ‘19 said, “The schedule is working working well for me. You can tell the school spent a while planning it.” But, while the class times are an improvement for Jillian, she did say that the main change she would make would be making lunch longer. Jillian also said that she misses having advisory every day. When asked if she thinks it works better for middle school or high school over all, she thinks it works better for both.

Another student, Ann Miller ‘21,  says the schedule works well for her and she doesn’t have any problems with it. However, she agrees that the lunch and tutorial periods are a bit rushed because since “we have to wait for the middle school students to get out, and we don’t have as much time to eat before the next period.” She also says that her favorite part of the schedule is flex time and that every class is not held every day. She personally thinks the schedule will work out better for everyone, especially once we have a bit more time to adjust to the changes.

In short, the schedule adjustment is a welcomed change.