The AP Drawing Portfolio is an intensive course, requiring students to produce individual artworks at the college level. Students compile a portfolio of 24-29 original artworks demonstrating mastery in composition, technique, and concept. 12 of those pieces explore a common idea, called a concentration. This year, Ms. Hoadley’s class will be sharing their progress via the enews! Be sure to mark your calendars to come meet the artists, and see some of their final works on April 26th!

Courtney Crawford ’18 finds respite in working creatively. Art is something she does because she loves and enjoys it. Sophomore year she began a non-profit called Creative Canvas for Kids, to provide art supplies for local students in need. Courtney is an artist and an advocate for creativity. Her work is detailed, and each mark thoughtfully and carefully placed.

Q. Courtney, what is the central idea of your concentration? How do you demonstrate exploration of this idea though your work?

A. The central idea of my concentration as of right now involves man’s relationship with nature and time. Time affects people in many ways, including myself significantly in the past couple of years. Humans have a tendency to focus on the future instead of the present. This tendency stems from the concept of time that man created. But when we focus solely on future events we lose the feeling of living in the moment and we tend to forget would-be significant memories because we are focusing so intensely on these future events. In a way, time is a trap that man fabricated for himself: we’re all slaves to time. I believe that it’s ultimately up to each individual to release themselves from the chains of time and experience his/her life as it comes instead of waiting on the future. I came to this realization while I was backpacking in the Alps and observing nature in its purest form with a group of the most incredible people I’ve ever met.

My concentration includes pieces based off of that trip in order to convey my personal journey to this awareness of time. Originally, my concentration was based on manmade time, depicting only physical clocks, but I realized that in order to display my view on time it would be more effective to not demonstrate the typical, concrete view of time, but an abstract one as seen through nature. In nature there is no concept of time. When I was in the Alps, we just kept hiking until we reached our destination, but only our guides knew where or what it was. So, instead of focusing on a time or a destination, we focused on each other and what we saw around us. After the trip, I felt closer to people I had met two weeks earlier, than I did to friends I had known for years at home. It was due to the lack of manmade time we had experienced in nature that we were able to make these intense connections with one another. Each piece in my concentration exhibits bits of the nature that seemed to eliminate time intermingled with man or man made contraptions and/or buildings. The goal of my concentration is thus to show the beauty and benefit of being surrounded constantly by nature instead of merely man made concepts like time. 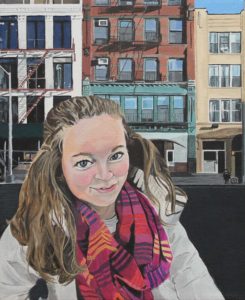 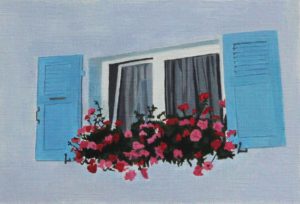 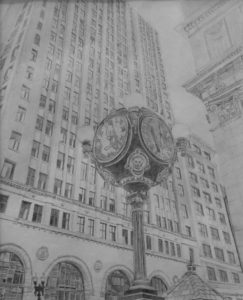 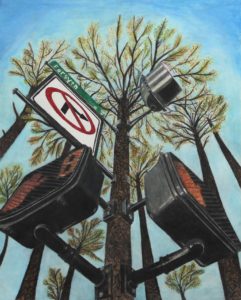 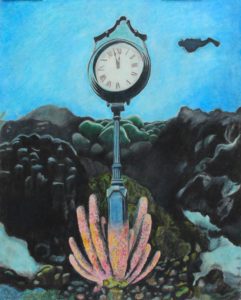 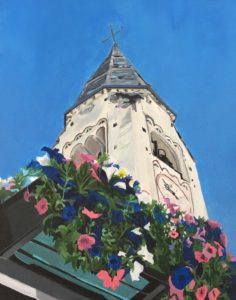