The AP Drawing Portfolio is an intensive course, requiring students to produce individual artworks at the college level. Students compile a portfolio of 24-29 original artworks demonstrating mastery in composition, technique, and concept. 12 of those pieces explore a common idea, called a concentration. This year, Ms. Hoadley’s class will be sharing their progress via the enews! Be sure to mark your calendars to come meet the artists, and see some of their final works on April 26.

Lexie Evanson has always loved drawing, as well as sculpture. Her current body of work is full of depth, action, details, and deeper meanings. A short glimpse of her work is impressive, but the longer you look at any of her pieces, the more you will notice and the more amazing it is! Each piece has a composition that has undergone several revisions before arriving at the final result.

A. The Central idea for my concentration is mannequins exploring humanity through human actions and creations. The purpose would be to make the viewer look at a blank slate, an inanimate object, something humans use to display things, doing purely human things. I would connect with each piece a purpose/key human concept being visualized by the mannequins’ actions.

I want to make the viewer ask themselves why the mannequins are doing what they’re doing, who made them do it? If anyone? What kind of sentience is being displayed by them, then, with these questions in mind, bridge the gap to ask why humans would do the same things. I would want to make them ask about humanity and human things without their knowing. Like to make them go “why are the mannequins doing that? That is so odd, but is it odd when humans do the same thing? What makes a human fighting more customary than dummies fighting?” I want to display the oddity and delicacy of humanity through beings (created by humans) who fundamentally cannot experience humanity.

I would also like to allow the audience to question humanity without any background info, or previous connection to it. With certain images, once you see them, you already know what is going on, but if the people involved, aren’t people at all, you ask if the conditions are the same and if there is even a reason for the implication of emotion if the beings acting it cannot understand it anyway.

The exploration of interaction and reasons are another thing i’d like to explore. How humans connect with themselves and the world around them. I would like to make the viewer struggle to understand what is happening even tho it is depicting themes and ideas they are already familiar with. Making you ask, who is the bad guy? Is there one? How do you know? Does it matter? I want to make the viewer examine their stance on moral issues by examining the situation without the consideration for humans in mind. The mannequins would be a blank spot on the canvas in theory, because with them lacking their own individualism, voice, and presence, they would merely reflect their surroundings, as well as the viewers interpretation of the presented scene. —— 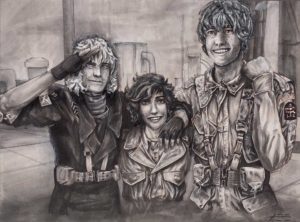