Associate Director of College Counseling Andrea Rizzi was invited to participate in a counselor tour of New York University’s campus in Abu Dhabi last week. The Abu Dhabi campus is one of three degree-granting campuses of NYU. The other two are in New York City and Shanghai. In addition, as part of their larger global network, NYU has campuses in 11 other cities including: Accra, Florence, Paris, Buenos Aries, DC, Berlin, Prague, Sydney, Tel Aviv, Madrid, and London. Students are strongly encouraged to study throughout the network.

Thirty-two college counselors from across the United States and Canada were joined by 186 admission candidates (high school seniors) who were being interviewed before a final admissions decision to the NYU Abu Dhabi campus would be rendered. The first session of the weekend included candidate introductions. As part of the introductions, students were asked to bring an object that reminded them of home and explain to the group its significance. Observing this interaction gave counselors an understanding of the incredible diversity that exists on the Abu Dhabi campus. Students were there not only from the United States but also Mumbai, Brazil, China, Russia, Egypt, Pakistan, Malawi, Ghana, Ireland, Estonia, Palestine, Sri Lanka, Hungary, Thailand, Colombia, Jamaica, Honduras and more.

Having students from such diverse backgrounds and cultures transforms the education that is being received in the classroom, which the counselors were also able to experience. Each attended a sample class taught by current faculty.

Ms. Rizzi sat in a class taught by Professor David Cook-Martin, a political sociologist, who was born in Costa Rica, but who also lived in Spain and the United States.

“The class dynamic was interesting to watch, as students immediately engaged with each other, the professor and the topic at hand,” said Rizzi.

As part of the class, the professor asked the students to consider their own theories on why people move (migration) and why people should care.

“Having students from eight different countries in the class allowed for richer discourse as each brought their experiences from their own countries to the conversation. This kind of classroom environment sought to challenge student’s assumptions and perspectives,” shared Ms. Rizzi.

In addition, the counselors participated in a campus tour, a session with department heads, a student panel, admissions presentation and had lunch with Campus Life staff (Career Services, Athletics, etc.) and faculty. The weekend also included dinner in the desert, complete with camel rides, hiking of sand dunes, a performance by a whirling dervish, a visit to the Louvre – Abu Dhabi, and a private tour of the Grand Mosque where the female counselors were required to wear an abaya (the traditional longer robe worn by the Emirati women) and a Shayla (scarf) to cover their hair. 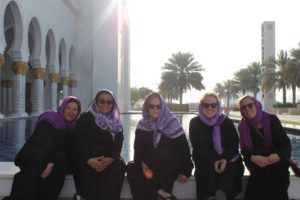 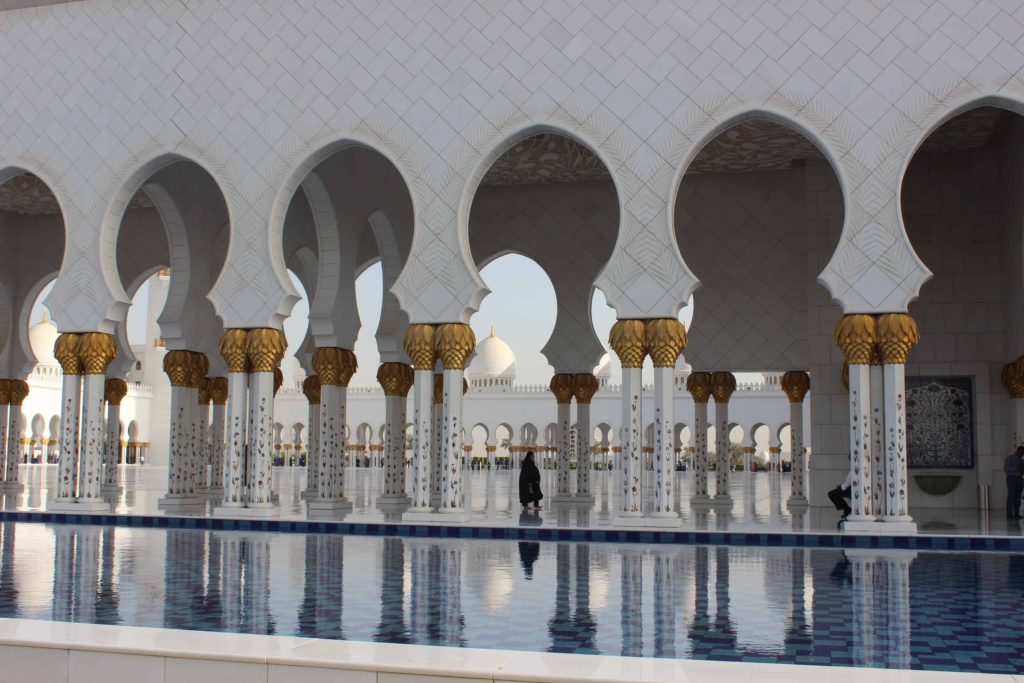 NYU Abu Dhabi is a liberal arts college that also offers a degree in engineering. It has a population of 1,250 students with the capacity to grow to 2,200 students in the next ten years. Only 15 percent of the of the population is Emirati and 14 percent come from the United States. There are 119 nationalities currently represented at the NYU-AD campus, which is a place where no one culture dominates.

“When you go there, you are truly a student of the world and that is extremely significant with regard to the education one receives while there,” said Ms. Rizzi.

Twenty-two majors are currently offered, the student/faculty ration is 4:1, students engage in a two semester capstone project in their senior year and spend (on average) up to two semesters abroad on one of the NYU affiliate campuses. 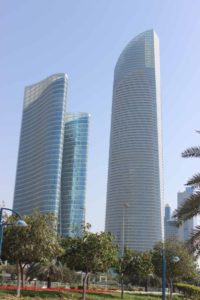 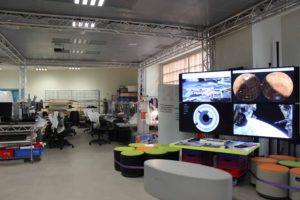 “It is interesting to note, however, that when students study at the Abu Dhabi campus they typically visit an average of eight countries in the four years that they are there,” said Ms. Rizzi.

The core curriculum reflects the population of the campus and therefore is not western based. Core classes have representation across disciplines. Faculty research, global internships, faculty mentoring, and professional preparation provide depth to the curriculum.

Admission to NYUAD is highly selective — about five percent of the students who apply are admitted. The yield is 86 percent of those students. NYU tends to cross applications with Ivy League schools, small liberal arts schools like Amherst, Williams, Swarthmore, Bowdoin, Middlebury, as well as Cambridge, Oxford, and Minerva.

When current students were asked who is the ideal candidate for NYUAD they collectively said it is a good fit for the student who is open-minded, empathetic, intellectually curious, has a willingness to learn not win, and is globally-minded.

“I don’t think there is a better place to study international relations than on the NYUAD campus. Students perspectives will be challenged inside and outside of the classroom given who their peers are. If our students at ESJ are looking for a worldly collegiate experience this one would be nothing short of amazing,” said Rizzi.

For more information on NYU Abu Dhabi please contact Ms. Rizzi in the College Counseling Office or follow any of the links below.

Who is the NYUAD Student?

Just for Fun: Where our students travel