The AP Drawing Portfolio is an intensive course, requiring students to produce art at the college level. Students compile a portfolio of 24-29 original artworks demonstrating mastery in composition, technique, and concept. Twelve of those pieces explore a common idea called a concentration.

Courtney Kurlas has been a part of the Episcopal Art Department since seventh grade. Her work has been included in the semester shows every year, demonstrating her mastery of material, understanding of concept and craft. Courtney’s work has been chosen among top students in the region as Gold Medal level. She has won gold and silver awards yearly since ninth grade. Last summer Courtney was able to attend a summer workshop in New York, and her work is currently exploring the connections correlations between depression and imagery using fabric and charcoal.

What is the central idea of your concentration?

The central idea of my concentration is depression and anxiety. Each piece depicts a symptom or struggle that many people experience if they have these mental illnesses. Another interesting aspect to my work is that each piece includes wrinkles or folds within different material. While this aspect doesn’t have as much of a deeper meaning to the concentration as a whole, I found that I really enjoyed the challenge of illustrating these wrinkles and folds in a realistic manner.

How does the work in your concentration demonstrate the exploration of your idea?

The work in my concentration so far demonstrates the exploration of my idea through the expressions of the girl as well as her positioning and actions. Also, each piece contains wrinkles or folds, whether they’re represented through a towel, pillow, bed sheets, etc.

How has your idea changed / developed since the beginning of the year?

I feel as though my concentration has really stayed the same throughout the year so far. I take and use reference pictures based off of the central idea so that I can try to stay on track throughout the course. Each piece is done in the same mediums and I intend for the rest of my pieces to as well. 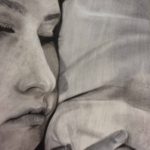