Gift Club Donors to Episcopal - Episcopal gratefully acknowledges the following donors for their gift during the 2019-2020 school year in support of The Episcopal Fund, restricted funds, endowment, and pledge payments to the capital campaign.

Chris and John Smith have been members of the Episcopal community for ten years.  They are parents to Speakman ’17 and Julian ’21. Christine and John are members of The 1966 Society of loyalty donors. While a student, Speakman ’17 was an avid swimmer, winning the Coaches Award in 2014-2015, 2015-2016, and 2016-2017.  He was captain of the Varsity swim team in 2016-2017 and was a member of the Student Government. Speakman is currently attending Howard University where he is a member of the men's swim team. Julian ’21 is also a swimmer, serving as captain of the Varsity swim team in 2019-2020. He is a member of the National Junior Honor Society and served on the Vestry.  Chris is a Director at Baptist Heart Hospital and John is a Pharmacist for CVS Pharmacy. 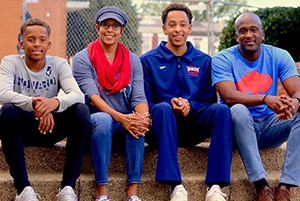