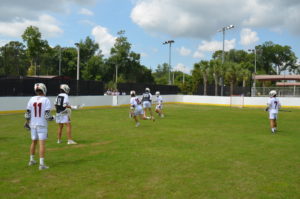 A Lacrosse Box facility helps student-athletes in the boys and girls lacrosse programs to build their skills. The confined playing area forces quicker decision making, confidence under pressure and sharper stick skills. Missed passes and shots result in a rebound, so there is no stoppage in play. In this space, smaller goals and bigger goalie pads teach players to have added focus while shooting. No defensive lacrosse sticks are allowed so players learn to play defense with good positioning and footwork. Unlike field lacrosse, players play both offensive and defense in box lacrosse, developing a complete skill set. This new equipment was made possible by the generous support of donors.